Each year, Aldrich creates a guide with the must-know information for your financial plan. Our experts compile the latest insights and opportunities to help you achieve your financial goals. The guides are divided into recommendations for businesses and individuals.

We hope this guide serves as a beacon for your upcoming financial planning. If you have questions or concerns about 2022 and 2023 tax planning, don’t hesitate to contact your Aldrich Advisor.

Throughout 2022, the world has seen another year of large swings in values of virtual currencies and virtual assets supported and based upon blockchain technology. Collectively, these are referred to as “digital assets.” While in 2021 the market rapidly increased, the markets in 2022 have generally seen a considerable decline.

As virtual currency grows in popularity, the IRS is expanding its examination of these assets and transactions. For example, beginning in 2019, the IRS began requiring taxpayers to affirmatively note if they had disposed of virtual assets; this question will continue to be on the 2022 tax return.

Additional legislation is being drafted in conjunction with other economic packages concerning cryptocurrency. It may have sweeping ramifications for businesses using digital assets in their day-to-day operations and brokers tracking the sales for their customers.

If you’re interested in mining cryptocurrencies or supporting blockchain via proof of stake or work computations, there may be associated business income subject to self-employment and income taxes. The continued evolution in decentralized finance may lead to an increase in complex transactions. This creates an emphasis on record-keeping.

Similar to acquiring and disposing of stocks, digital assets should be managed carefully. Many third-party sites offer programs to track and compute unrealized gains and losses and manage transfers between wallets. Using these tools, you can evaluate your positions and make informed decisions.

We recommend managing capital gains by harvesting losses if you invest in digital assets. Since digital assets are classified as property for tax purposes, wash sale rules do not apply when selling positions at a loss. Thus, you may sell a digital asset in a loss position to offset recognized gains from earlier in the year and have a smaller net taxable gain between the transactions.

Additionally, investors should determine where virtual assets are located, especially if any are in foreign accounts. Digital assets housed outside of the US may be subject to foreign income regulations or accounting reporting rules. Regulatory compliance for these assets can be complex, and the associated penalties are steep.

Additional foreign reporting may apply, depending on the maximum value of your account during the year or as of December 31, 2022. These specific requirements have yet to be finalized by the Financial Crimes Enforcement Network (FinCEN), so we are monitoring and awaiting additional comment from regulators.

When the COVID-19 pandemic began in 2020, the passage of the Coronavirus Aid, Relief, and Economic Security (CARES) Act gave a reprieve to borrowers as unemployment and forced economic shutdowns became prevalent. Under the CARES Act, federal student loans were put into a suspension of payments with a 0% interest rate through December 2022 (after extensions). Additionally, any collection on defaulted loans was put on hold.

On August 24, 2022, President Biden announced a plan for targeted debt relief. The Department of Education is canceling certain student debt for individuals making less than $125,000 and married couples making less than $250,000. In addition, Pell Grant Recipients can have up to $20,000 canceled and up to $10,000 for other borrowers.

In addition, loan balances will be forgiven after ten years of payments rather than the original 20 years for those with balances less than $12,000.

The debt cancellation will not be considered taxable income for any amount forgiven before January 1, 2026 at the Federal level but may be taxable by some states. For those who still have loan balances to pay back, debt servicers will take many weeks to re-engage in collecting student loans after the multi-year pause.

Additionally, contracts with service providers may have changed or lapsed since the pause began and/or borrowers may have moved locations, so getting back to a normal payment cycle may take a while.

For taxpayers that continued making payments on their student loans, individuals can claim up to $2,500 of qualified student loan interest expense as an above-the-line deduction from income on their 2022 tax return. Interest payments that qualify for this deduction are related to loans issued to you, your spouse, or your dependents to pay for qualified education expenses while the student was attending school at least half-time.

The deduction may be limited depending on your tax filing status and modified adjusted gross income (MAGI). For married filing joint taxpayers, the deduction begins to phase out at $140,000 of MAGI, and the deduction is fully phased out at $170,000.

As it has been over two and a half years since payments were last made, we recommend that you begin to contact your lender(s) proactively to review/update any direct deposit authorizations or your contact address and phone number. You should also confirm who is currently servicing your debt and see if you need to set up a new account on the new provider’s website.

The CVC will allow taxpayers to claim a tax credit of up to $7,500 for qualifying new clean vehicles. Meaning, a vehicle:

The full extent of these changes go into effect for 2023 tax credits, but certain changes, such as the manufacturing requirement in the US, became law when Biden signed the bill on August 16, 2022.

Many states offer additional incentives for electric and hybrid vehicles outside these income tax credits. In addition, local utility companies may also provide incentives and rebates for related home charging equipment. You should investigate your state options to ensure you receive all available incentives.

The Tax Cuts and Jobs Act of 2018 added a cap on the federal State and Local Tax (SALT) deduction at the individual level of $10,000. Since then, many states with high individual income taxes have sought a workaround.

At the end of 2020, the IRS announced that it would allow a federal deduction for pass-through entities which could elect to pay state taxes of the owners at the entity level. In response, 29 states, including Oregon and California, have since enacted a Pass-Through Entity Elective Tax (PEET).

For taxpayers with income from inside and outside of states with PEET options, the benefit of the credit becomes slightly more complicated. Further analysis will often need to confirm all the tax benefits of such an election.

How does PEET work in Oregon?

Oregon’s law will be in effect for 2022 and 2023. Initially, it did not account for estimated taxes to be paid during 2022 by each entity. However, Senate Bill (SB) 1524, signed into law at the end of March 2022, now requires pass-through entities to pay estimated taxes for the Oregon PTE-E beginning June 15, 2022.

The actual election for the PEET occurs on a timely filed Oregon return. If estimates were not paid by June 15, the election can still be made, and the state will simply charge interest on the late payments. The election in Oregon includes all owners and can only be made if all owners are effectively individuals.

The ultimate result is that the entity makes a tax payment to Oregon and deducts such payment on their Federal return, reducing taxable income. The owners get an Oregon tax credit for that amount and claim it on their personal returns.  Any excess amount paid is fully refundable.

The Oregon PEET may provide a tax benefit for owners receiving a K-1 from a pass-through entity, particularly if the PTE and all its owners are located in Oregon. If a PTE has owners outside of Oregon, there is generally some benefit, but more analysis is required. Making the appropriate estimated tax payment before year-end allows for the most benefit to the owners.

How does PEET work in California?

On February 9, 2022, Governor Newsom signed Assembly Bill 87, which addresses changes to the elective pass-through entity (PTE) tax credit rules under Assembly Bill 150 (SALT workaround). The bill helps California PTE owners with the federal limit on state tax deductions on their personal returns. There are still more updates to the law that could happen in the future, but these changes expand the tax savings to more taxpayers than the original rule.

The annual election for the PEET is made on a timely filed return, but California requires the greater of $1,000 or 50% of the prior year’s PEET payment to be made by June 15 to qualify for that year’s credit. The election in California is done on an owner-by-owner basis so each owner can make their own decision. The credit in California is not refundable, so additional analysis is needed to confirm the benefits.

For California, the choice to elect into the PEET effectively needed to be made by June 15 due to estimated tax payment requirements. Please work with your Aldrich Advisor to confirm what option is best for you in 2023 and plan now for the expected cash flow needs.

Legislative leaders in California reached a 2022-23 budget agreement that contains tax refunds to combat inflation and other significant tax relief. Among these initiatives is the middle class tax refund. Ranging from $200 to $1,050, these payments are not considered taxable income and can be treated as any other state tax refund.

Payments will be sent to taxpayers between October 2022 and January 2023.

These payments will be directly deposited if the state has your bank information. Retain the amount of the payment received and provide the amount to your Aldrich Advisor next year with your tax information.

In April 2021, the state of Washington’s Legislature passed a state capital gains tax for individuals with Washington-allocated gains. This 7% tax will be charged on long-term investments. The proceeds will fund the state’s early education and childcare programs and are expected to total nearly $415 million starting in 2023. The tax would have become effective on January 1, 2022.

In March 2022, Douglas County Superior Court Judge Brian Huber struck down Washington’s new capital gains tax. While supporters characterize it as an excise tax, critics say it’s an income tax that violates the state’s constitution. The issue will move to the state supreme court to decide if it ends up on the ballot for voters.

The first tax payments for this tax would have been due on April 18, 2023. It is expected for the Washington State Supreme Court to rule by then.

Given that Oregon passed significant tax increases over the past year, this is now hitting home and has prompted many taxpayers to reconsider where they work and live. California imposes the highest income tax burden, but Oregon is not that far behind. In fact, the Portland Metro region in Oregon now has the fifth highest income tax rate in the country, behind California, Hawaii, New York, and New Jersey.

Increased flexibility from employers and opportunities for working remotely make an out-of-state move more realistic. Various states went through significant shifts in their population as people migrated in 2021, with low-tax states experiencing an influx of new residents and higher population growth.

While lowering your income tax can motivate changing your county or state, evaluate all the non-tax implications and benefits before making that big move. It’s important to look at other cost-of-living expenses, including other taxes, such as property, estate, sales, and retirement income tax.

As a reminder, we recommend keeping all relevant tax documents on hand for a minimum of seven years. Here’s a detailed chart with record retention best practices.

This year-end tax planning guide is based on the prevailing federal tax laws, rules, and regulations. It is subject to change, especially if Congress enacts additional tax legislation before the end of the year. Your personal circumstances will likely require careful examination.

This guide was written with the most current information as of November 1, 2022. Please continue to check back for future updates. 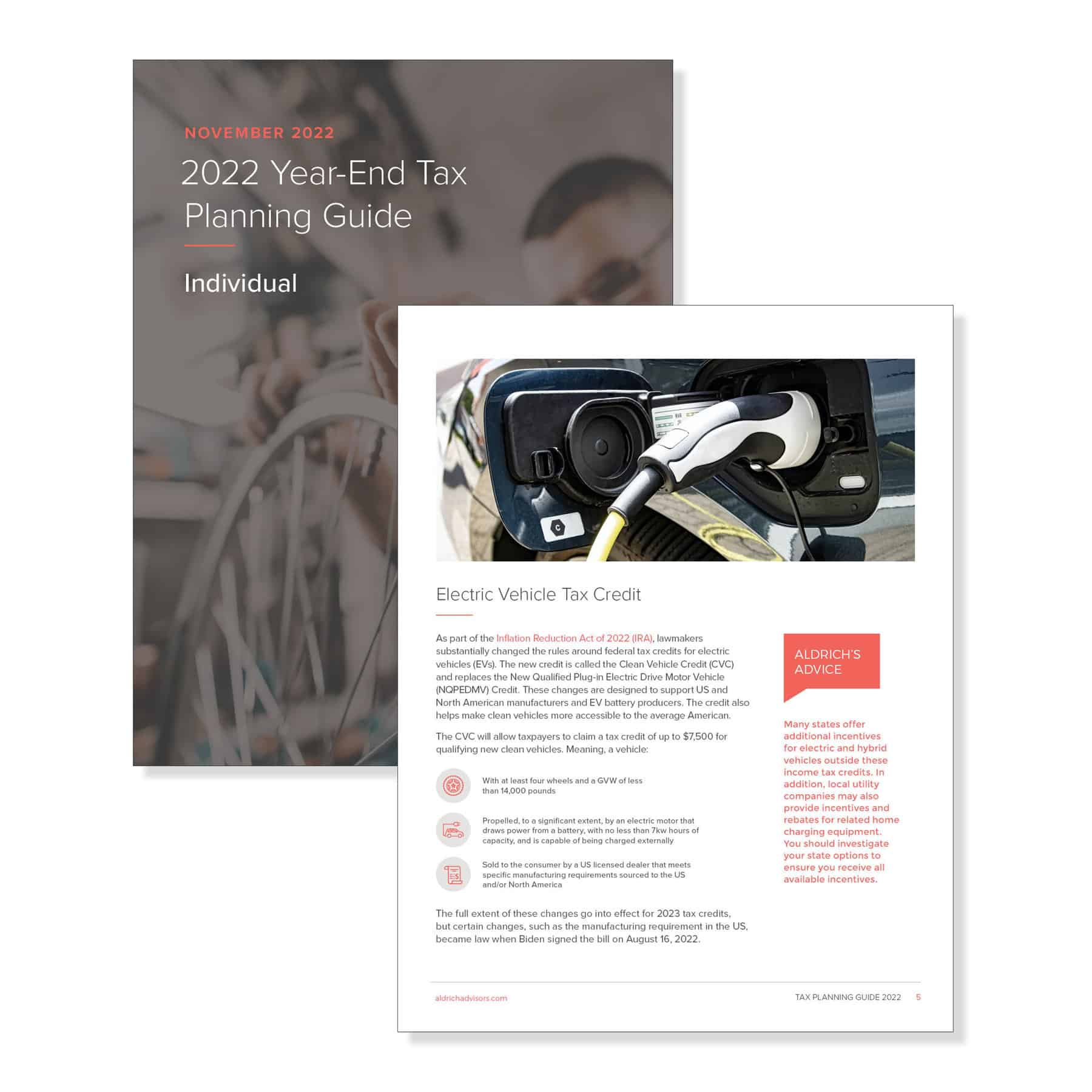 When should I create a subsidiary?